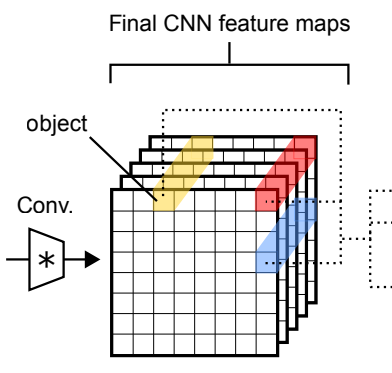 The main idea of Relation Networks (RN) is to constrain the functional form of convolutional neural networks as to explicitly learn relations between entities, rather than hoping for this property to emerge in the representation during training. Formally, let \(O\) be a set of objects of interest \(O = \{o_1 \dots o_n\}\); The Relation Network is trained to learn a representation that considers all pairwise relations across the objects:

\(f_{\phi}\) and \(g_{\theta}\) are defined as Multi Layer Perceptrons. By definition, the Relation Network (i) has to consider all pairs of objects, (ii) operates directly on the set of objects hence is not constrained to a specific organization of the data, and (iii) is data-efficient in the sense that only one function, \(g_{\theta}\) is learned to capture all the possible relations: \(g\) and \(f\) are typically light modules and most of the overhead comes from the sum of pairwise components (\(n^2\)).

The objects are the basic elements of the relational process we want to model. They are defined with regard to the task at hand, for instance:

The main evaluation is done on the CLEVR dataset [2]. The main message seems to be that the proposed module is very simple and yet often improves the model accuracy when added to various architectures (CNN, CNN + LSTM etc.) introduced in [1]. The main baseline they compare to (and outperform) is Spatial Attention (SA) which is another simple method to integrate some form of relational reasoning in a neural architecture.

This paper builds on the Relation Network architecture and propose to explore more complex relational structures, defined as a graph, using a message passing approach: Formally, we are given a graph with vertices \(\mathcal V = \{v_i\}\) and edges \(\mathcal E = \{e_{i, j}\}\). By abuse of notation, \(v_i\) also denotes the embedding for vertex \(i\) (e.g. obtained via a CNN) and \(e_{i, j}\) is 1 where \(i\) and \(j\) are linked, 0 otherwise. To each node we associate a hidden state \(h_i^t\) at iteration \(t\), which will be updated via message passing. After a few iterations, the resulting state is passed through a MLP \(r\) to output the result (either for each node or for the whole graph):

Comparing to the original Relation Network:

The experiments essentially compare the proposed RRNN model to the Relation Network and classical recurrent architectures such as LSTM. They consider three datasets:

This paper presents a very simple trick to make Relation Network consider higher order relations than pairwise, while retaining some efficiency. Essentially the model can be written as follow:

It is not clear why this model would be equivalent to explicitly considering higher-level relations (as it is rather combining pairwise terms for a finite number of steps). According to the experiments it seems that indeed this architecture could be better fitted for the studied tasks (e.g. over the Relation Network or Recurrent Relation Network) but it also makes the model even harder to interpret.