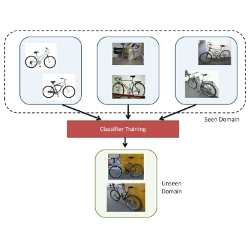 In this paper, the authors tackle the problem of Domain Generalization: Given multiple source domains, the goal is to learn a joint aligned feature representation, hoping it would generalize to a new unseen target domain. This is closely related to the Domain Adaptation task, with the difference that no target data (even unlabeled) is available at training time. Most approaches rely on the idea of aligning the source domains distributions in a shared space. In this work, the authors propose to additionally match the source distributions to a known prior distribution.

The goal of domain generalization is to find a common domain-invariant feature space underlying the source and (unseen) target spaces, under the assumption that such a space exists. To learn such space, the authors propose a variant of [1], whose goal is to minimize the variance between the different source domains distributions using Maximum Mean Discrepancy. Additionally, the source distributions are aligned with a fixed prior distribution, with the hope that this reduces the risk of overfitting to the seen domains.

The proposed model, MMD-AAE (Maximum Mean Discrepancy Adversarial Auto-encoder) consists in an encoder , that maps inputs to latent codes, and a decoder . These are equipped with a standard autoencoding loss to make the model learn meaningful embeddings

Based on the AAE framework [1], we also want the learned latent codes to match a certain prior distribution, (In practice, a Laplace distribution). This is done by introducing a GAN (Generative Adversarial Networks) loss term on the generated embeddings, with the prior as the true, target, distribution. Introducing , a discriminator with binary outputs, we have:

On top of the AAE objective, the authors propose to regularize the feature space using MMD, extended to the multi-domain setting. They key idea of the maximum mean discrepancy (MMD) is to compare two distributions and using their mean statistics rather than density estimators:

Following [2], the authors extend this metric for multiple domains. First, we define the distributional variance to measure the dissimilarity across domains using a mean map operator, computed via the distribution over all domains, .

which is 0 if and only if all the domain distributions are equal. Finally, this quantity is hard to compute but can be upper-bounded by a sum of pairwise MMDs:

In practice, the MMD is computed under a specific kernel choice and approximating the expectations by their empirical estimates.

where is the kernel function associated to feature map . Experiments are conducted with various Gaussian RBF priors.

Finally, the model should learn a representation that is also adequate for the task at hand (here, classification). This is done by adding a classifier (two fully connected layers) on top of the representation minimizing a standard cross entropy loss term, between the input image label and the model output.

The MMD functional space uses the RBF (Gaussian) kernel. The final objective is the weighted sum of the four aforementioned loss terms ( and ). The model is trained similarly to GANs: The discriminator and generator (auto-encoder) parameters are updated in two alternating optimization steps.

The method is evaluated on various classification tasks (digit, object and action recognition) in settings where the domains differ by small geometric changes (e.g., change of pose). They also compare to a large range of baselines, although none of them seem to have an adversarially learned representation space (maybe [3] would have been a good additional baseline).

Additionally, ablation experiments show that the three terms , and all have a positive effect on the final effect, even when taken individually.