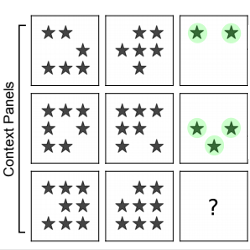 The authors introduce a new visual analogy dataset with the aim to analyze the reasoning abilities of ConvNets on higher abstract reasoning tasks such as small IQ tests.

This paper introduces the Procedurally Generated Matrices (PGM) dataset. It is based on Raven’s Progressive Matrices (RPM) introduced by psychologist John Raven in 1936. Given an incomplete 3x3 matrix (missing the bottom right panel), the goal is to complete the matrix with an image picked out of 8 candidates. Typically, several candidates are plausible but the subject has to select the one with the strongest justification. 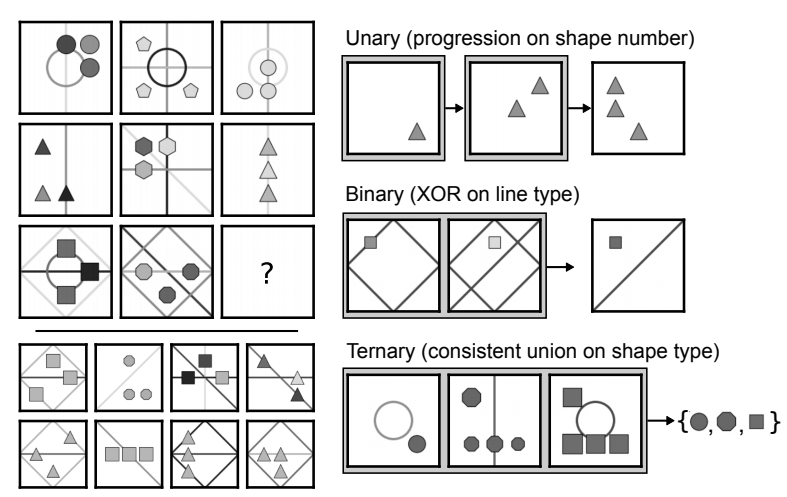 Figure: An example of PGM (left)) and depiction of relation types (right)

A PGM is defined as a set of triples , each encoding a particular relation. For instance (progression, lines, number) means that the PGM contains a progression relation on the number of lines. In practice, the PGM dataset only contains 1 to 4 relations per PGM. The construction primitives are as follows:

Note that some relations are hard to define (for instance progression on shape position ?), and hence ignored. In total, 29 possible relations triples are considered.

The attributes which are not involved in any of the relations of the PGM are called the nuisance attributes. They are chosen either as a fixed value for all images in the sequence, or randomly assigned (distracting setting).

The authors consider 8 generalization settings to evaluate on:

The main contributions of the paper are to introduce the PGM dataset and evaluate several standard deep architectures on it:

Additionally, they consider a semi-supervised variant where the model tries to additionally predict the relations underlying the PGM (encoded as a one-hot vector) as a meta-target. The total loss is a weighted average between the candidate classification loss term and the meta-target regression loss term.

The CNN-based models perform consistently badly, while LSTM provides an improvement but a small one. The Wild ResNet provides further improvement over ResNet, which shows that using a panel scoring structure is more beneficial than direct classification of the correct candidate. Finally WReN outperforms all other baselines, which could be expected as it makes use of pairwise interactions across panels. The main benefit of the method is its simplicity (Note: it could be interesting to compare again other sequential architecture on ResNet).

While the WReN achieves satisfying accuracy on the neutral and interpolation splits (~ 60%), as one would expect this does not hold for the more challenging settings, e.g. it significantly drops to 17% on the extrapolation setting.

More generally, it seems that the model has troubles generalizing when some attributes are never seen during the training, (e.g., extrapolation or attr.rels settings) which seems to indicate the model probably more easily picks visual properties rather than high-level abstract reasoning ones.

The authors also report results broken down by number of relations per matrix, relation types and attribute types(when only one relation). As one would expect, one-relation are the easiest to solve, but, interestingly, it is slightly easier to solve three-relations matrices than four-relations one, which might be because it determines a more precise answer.

As for relations, XOR and progression are the hardest to solve although the model still performs decently well on those (50%).

The main observation is that the previously proposed model seems to disregard high-level abstract relations (e.g. considering the poor accuracy on the extrapolation set). this paper proposes to improve the encoding step by embedding the panel in a “disentangled” space using a -VAE.

There are also a few weird details in the experimental section. For instance, they claim the RN embedding has dimension 512, while it has dimension 256 (it only becomes 512 whe concatenating in ). Second, they use a VAE embedding has latent dimension 64 and it’s not clear why they wouldn’t use more dimensions for a fairer comparison. The encoder used is also two layers deeper .

The model yields some improvement, especially on the more challenging settings (roughly 5% at best). They however omit results in the extrapolation regime.

RAVEN: A Dataset for Relational and Analogical Visual rEasoNing [5]

This paper is conceptually very similar to “ Measuring abstract reasoning in neural networks”, they also propose a new dataset for visual reasoning based on *Raven matrices** and evaluate several baselines in various testing settings.

The dataset generation process is formulated as a grammar the generated language defining instances of PGM matrices. Compared to the PGM dataset, they stick closer to the definition of Advanced Raven Progressive Matrices as defined in [2], and the distribution of rules seems to be quite different from the PGM dataset, for instance, rules only apply row-wise. They design 5 rule-governing attributes and 2 noise attributes. Each rule-governing attribute goes over one of 4 rules, and objects in the same component share the same set of rules, making in total 440, 000 rule annotations and an average of 6.29 rules per problem. ```

As for the rules, they can be split into four main categories:

The authors want to make use of the annotated structure of the generated matrics using a Dynamic Residual Tree (DRT). Each Raven matrix, corresponds to a sentence sampled from the Grammar, and as such can also be represented as an annotated tree, , from scene to entities. The authors them build a residual module where single layers are ReLU-activated fully-connected layers, wired according to the tree structure similar to Tree-LSTM. More specifically, let us denote by the label of node . Each node correspond to one layer in the residual module, as follows:

In summary, the DRT module is given the input image which is fed to the nodes, starting from the leaves and going up to the root, scene, node. Finally it is made into a residual module by adding it to the input features. in other words:

For experiments, the baselines include the Wild Relation Network (WReN) from, the CNN network from [3] that performs direct prediction, a ResNet-18 Network and a LSTM. They also have human performance baselines, where the test subjects are non-expert but do have some knowledge of Raven matrices. Finally, they also have an ‘oracle’ baseline (solver), which has full knowledge of the relational structure, in which case the problem is reduced to finding the correct assignment. Finally, they augment each module with a DRT residual block, which usually they only introduce at the penultimate layer level. Except for the WReN, where the DRT is used at the end of the CNN encoder, i.e. before the relational module

Overall the experiments results are interesting, but leads to some trange conclusions: