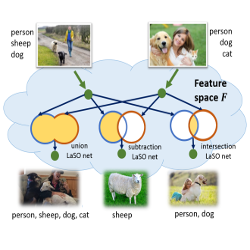 In this paper, the authors tackle the problem of "multi-label few-shot learning", in which a multi-label classifier is trained with few samples of each object category, and is applied on images that contain potentially new combinations of the categories of interest. The key idea of the paper is to synthesize new samples at the feature-level by mirroring set operations (union, intersection, subtraction), hoping to the train/test distribution shift and improve the model's generalization abilities.

The proposed method consists in manipulating the semantic content of the training images at the feature-level to generate new combinations of semantic labels, in particular relying on known set operations: union (), intersection () and set subtraction (). Interestingly, operations such as and could additionally shine new light on implicit semantic information: For instance, in a task of animal classification, the operation zebra horse describes the attribute striped, which is not one of the original classes of interest, but a meaningful semantic attribute.

Figure: LaSO manipulates the semantic content of the data for better generalization. Suppose you wish to build a multi-label classifier for wild animals. You go to a zoo and take a few photos of each animal. But alas, all of the animals are caged (a) and this few-shot trained classifier is likely to have some difficulty with the generalization to animals in the wild (c). Note that in this case, the label ‘caged’ is not even part of the label vocabulary, which only contains animals

The label set operations are performed at the feature-level, which in particular allows for using pre-trained feature representations, but makes the example generation process less interpretable, since we do not visualize the actual samples. Given images , their corresponding labels set , and a feature extractor , we train three neural networks to capture label sets operations at the feature-level:

Finally, the model contains regularization losses that enforces known constraints of set operations, e.g.symmetry constraints for the intersection and union operations in the mappers and : 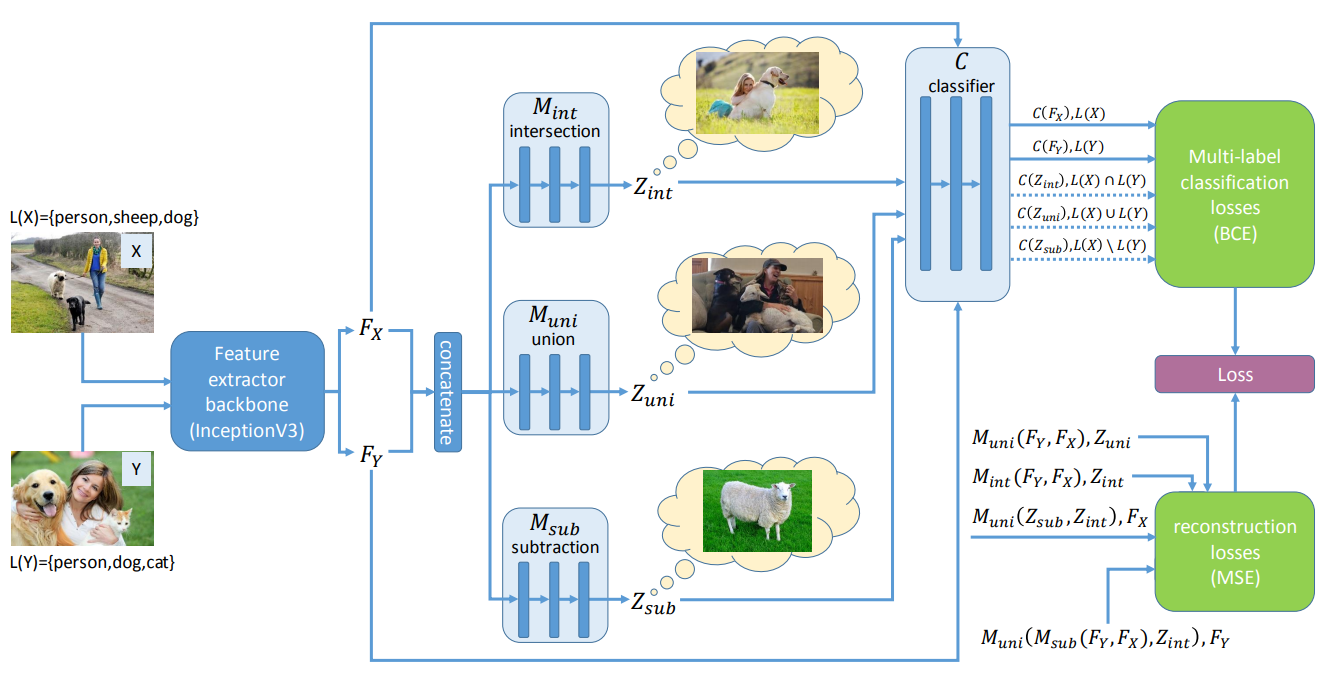 Figure: Summary of the LaSO model. Extracted features `\phi(x) = F_x` and `\phi(y) = F_y` are combined by MLPs `M^{\mbox{op}}` to emulate classical set operations on the label space. The resulting new samples are fed to a multi-label classifier (top right part), with the original samples. The bottom right part corresponds to the regularization losses.

One suggested variant is, instead of learning the label-set operator as neural networks, to define them analytically. The authors propose to use the same standard formalism for set operations but on the feature representations:

However, in practice this performs generally much worse than learning the transformation (except in the case of the union operator, where it reaches similar performance).

Each LaSO network is a 3 or 4 layers standard Multi-Layer Perceptron. The training is done in two steps: First, the feature extractor is pretrained and fixed (ResNet-34 or Inception v3 architecture), and then both the feature extractor and the LaSO model are jointly trained. The authors consider two experimental settings: