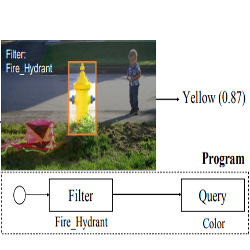 Here the authors tackle the problem of Visual Question Answering. They propose to learn jointly from visual representations and text-level knowledge (question-answer pairs). They further make use of (i) curriculum learning and (ii) a differentiable symbolic solver for reasoning.

Figure: The Neuro-Symbolic Concept Learner aims to learn jointly a vocabulary of visual concepts, semantic embedding of question sentences, and how to execute them.

The model is rather involved and complex, and can be summarized as follows:

The training is done end-to-end, where the training objective consists in maximizing the right answer after executing the program (parsed question) on the visual representations (outputs of the perception modules and concept quantization).