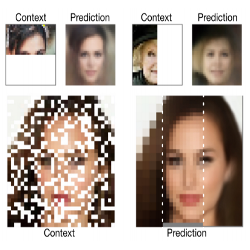 Gaussian Processes are models that consider a family of functions (typically under a Gaussian distribution) and aim to quickly fit one of these functions at test time based on some observations. In that sense there are orthogonal to Neural Networks which instead aim to learn one function based on a large training set and hoping it generalizes well on any new unseen test input. This work is an attempt at bridging both approaches.

In the Conditional Neural Processes (CNP) setting, we are given labeled points, called observations , and another set of unlabeled targets .We assume that the outputs are a realization of the following process: Given a distribution over functions in , sample , and set for all in the targets set.

The goal is to learn a prediction model for the output samples while trying to obtain the same flexibility as Gaussian processes, rather than using the standard supervised learning paradigm of deep neural networks. The main inconvient of using standard Gaussian Processes is that they do not scale well ().

CNPs give up on the theoretical guarantees of the Gaussian Process framework in exchange for more flexibility. In particular, observations are encoded in a representation of fixed dimension, independent of .

In other words, we first encode each observation and combine these embeddings via an operator to obtain a fixed representation of the observations, . Then for each new target we obtain parameters conditioned on and , which determine the stochastic process to draw outputs from. 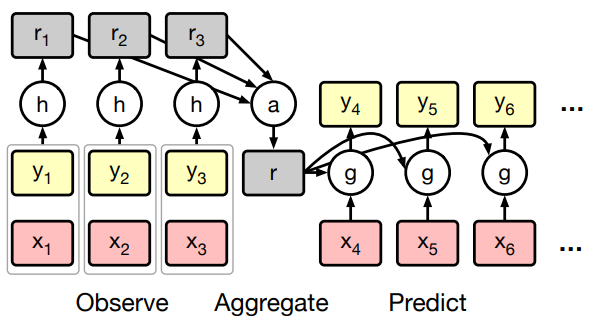 In practice, is taken to be the mean operation, i.e., is the average of s over all observations. For regression tasks, is a Gaussian distribution parameterized by mean and variance For classification tasks, simply encodes a discrete distribution over classes.

Given observations , , we sample uniformly in and train the model to predict labels for the whole observations set, conditioned only on the subset by minimizing the negative log likelihood:

Note: The sampling step is not clear, but it seems to model the stochasticity in output given .

The mode scales with , i.e., linear time, which is much better than the cubic rate of Gaussian Processes.