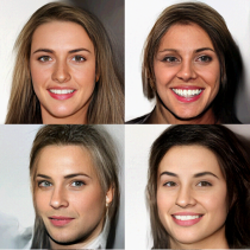 where is an invertible function, i.e. a bijection, . It acts as an encoder from the input data to the latent space. is usually built as a sequence of smaller invertible functions . Such a sequence is also called a normalizing flow [1]. Under this construction, the change of variables formula applied to gives the following equivalence between the input and latent densities:

Each flow step function is a sequence of three operations as follows. Given an input tensor of dimensions :

These operations are then combined in a multi-scale architecture as described in [3], which in particular relies on a squeezing operation to trade of spatial resolution for number of output channels. Given an input tensor of size , the squeezing operator takes blocks of size and flatten them to size , which can easily be inverted by reshaping. The final pipeline consists in levels that operate on different scales: each level is composed of flow steps and a final squeezing operation. 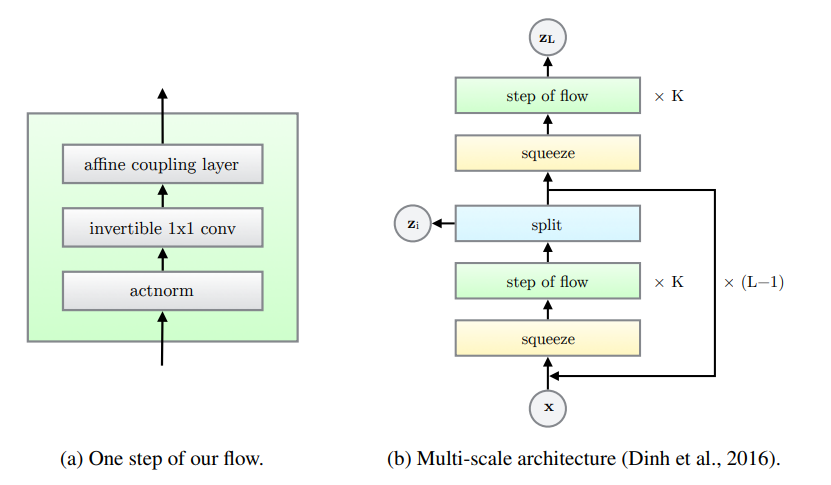 In summary, the main differences with [3] are:

In practice, the authors implement NN as a convolutional neural network of depth 3 in the ACL; which means that each flow step contains 4 convolutions in total. They also use flow steps in each level. Finally the number of levels is 3 for small-scale experiments (32x32 images) and 6 for large scale (256x256 ImageNet images). In particular this means that the model contains a lot of parameters ( convolutions) which might be a practical disadvantage compared to other method that produce samples of similar quality, e.g. GANs. However, contrary to these models, GLOW provides exact likelihood inference.

GLOW outperforms RealNVP [3] in terms of data likelihood, as evaluated on standard benchmarks (ImageNet, CIFAR-10, LSUN). In particular, the 1x1 convolutions performs better than other more specific permutations operations, and only introduces a small computational overhead.

Qualitatively, the samples are of great quality and the model seems to scale well with higher resolution. However this greatly increases the memory requirements. Leveraging the model’s invertibility to avoid storing activations during the feed-forward pass such as in [4] could be used to (partially) palliate the problem.