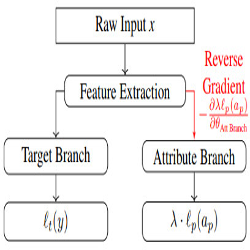 In this work, the authors tackle the problem of learning fair representations, i.e. representations that should be insensitive to some given sensitive attribute, while retaining enough information to solve the task at hand. Given some input data `x` and attribute `a_p`, the task is to predict label `y` from `x` while making the attribute `a_p` protected, in other words, such that predictions are invariant to changes in `a_p`.

The proposed model builds on the Domain Adversarial Network (DANN) [1], originally introduced for unsupervised domain adaptation. Given some labeled data , and some unlabeled data , the goal is to learn a network that solves both classification tasks and while learning a shared representation between and .

The model is composed of a feature extractor which then branches off into a target branch, , to predict the target label, and a domain branch, , predicting whether the input data comes either from domain or . The model parameters are trained with the following objective:

The gradient updates for this saddle point problem can be efficiently implemented using the Gradient Reversal Layer introduced in [1].

In Gradient Reversal Against Discrimination (GRAD), samples come only from one domain , and the domain classifier is replaced by an attribute classifier, , whose goal is to predict the value of the protected attribute . In other words, the training objective strives to build a feature representation of that is good enough to predict the correct label but such that cannot easily be deduced from it.

On the other hand, one could directly learn a classification network which would be penalized when predicting the correct value of attribute ; However such a model could learn and trivially outputs an incorrect value. This situation is prevented by the proposed adversarial training scheme.

The authors also consider a variant of the described model where the target branch instead solves the autoencoding/reconstruction task. The features learned by the encoder can then later be used as entry point of a smaller network for classification or any other task.

GRAD always reaches highest consistency compared to baselines. For the other metrics, the results are more mitigated, although it usually achieves best or second best results. It is also not clear how to choose between GRAD-pred and GRAD-auto as there does not seem to be a clear winner, although GRAD-pred is a more intuitive solution when supervision is available, as it directly solves the classification task.

Authors also report a small experiment showing that protecting several attributes at once can be more beneficial than protecting a single attribute. This can be expected as some attributes are highly correlated or interact in meaningful way. In particular, protecting several attributes at once can easily be done in the GRAD framework by making the attribute prediction branch multi-class for instance: however it is not clear in the paper how it is actually done in practice, nor whether the same idea could also be integrated in the baselines for further comparison.